Skip to content
Our days in the US were, for the most part, hot and sunny. We were able fit in most of what we wanted to do and still managed to steal some time to sit out with my friend Glenn in his back yard with bourbon and cigars while the sultry summer night closed in.

It didn’t feel as if I were on holiday, but more like I had just stepped out of a long dream, or into one; it was a surreal, disconcerting feeling. All around me were sights, sounds and smells that were so familiar yet strangely foreign. There was so much I had forgotten about life in rural America:

– The soothing symphony of crickets
– The hum of June bugs
– Snake spit
– How the world just seems suspended during a lazy, sunny afternoon
– The dewy freshness of a meadow in the morning
– What a really hot day feels like
– The stillness and quiet of a country morning
– Screen doors
– Houseflies
– Fire Flies
– Thunderstorms
– Yellow School Buses

I could go on, but I’ll spare you more details. Suffice it to say, it was magic. 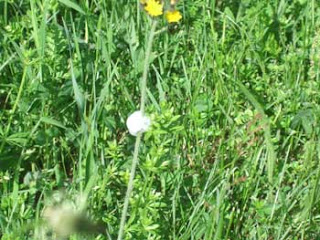 For those of you wondering what I am on about, this is snake spit;
it’s not from a snake, it’s a sort of bug larva covering.
Another forgotten item was ‘Alphie’ my old AlphaSmart. I’ve been using AlphaSmart devices for over eight years and when I moved to my Neo in 2006 I lent Alphie to Glenn. She has been at his house ever since. I can’t say I have given her much thought but when I saw her on the bookshelf I couldn’t resist taking her out for old time’s sake.

Turns out, I wasn’t the only one glad to see her. 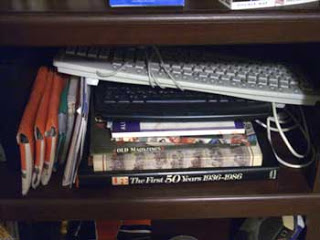 Neo and Alphie got on like a house on fire and, as the evening progressed and the wine flowed freely, they became quite cuddly.

Later, when they thought I wasn’t watching, they slipped away and I caught them, in flagrante delicto in the spare bedroom. 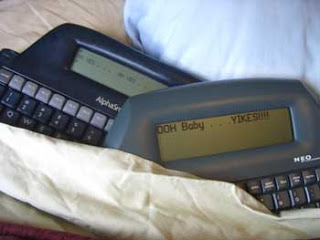 Caught in the act.
I didn’t do it on purpose; it’s just that I had an idea for an article and I wanted to write it down before I forgot it so I went looking for them. I found a pad of paper and a pencil, instead, and left them to it. After all, they’re both of age and we were on holiday; no harm in a little fun.

I’ve always said that the best thing to come out of my moving to England was the fact that my visits home provide an excuse for my family to get together without requiring someone to die. My siblings come up from down south and down from up north and we all descent upon my cousin and her husband, who willingly open their home to the horde. The day is filled with barbeques, beer, campfires and reminiscing, and it is always the focal point of the trip.

At my cousin’s house.

At my Dad’s house. that’s Becky on the right, my brother’s wife,
and my sister, Mel, with the hair (you figure out who my Dad is).
When we were young, I used to call my sister ‘Cousin It’.
The other reunion is a bit simpler and involves me going to a predetermined pub and making sure everyone knows I’m there so they can stop by for a drink and some catching up. This year, four people showed up; I guess I don’t have the star power I used to have.

We might have been a small group, but we had a grand time and made a pact to meet up again on my next visit. 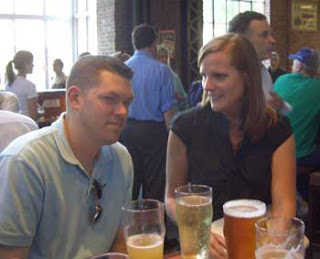 At the Pump Station; that’s Mitch (AKA The Boy) with Allie, my
future daughter-in-law. In the background is Glenn, who has
already abandoned us to chat up a bevy of young beauties.
Our last day in the area was, fortuitously, Father’s Day, which provided The Boy with the unprecedented opportunity of treating me to dinner. He took me, my wife, his fiancée and my other son to the Real Seafood Company. It was a marvellous meal but a bit beyond Burger King. I never saw the bill, but the look on his face when it arrived was the best present I could ever have received.

After that we moved further afield, visiting my friends, Matt and Lisa, on their croft. Having visited there before, I hadn’t bothered to print a map, believing (in the face of overwhelming evidence to the contrary) that I would remember the way. My backup plan (and I did have one) was to buy a map once I got in the general vicinity.

I had been taught a lesson about pay phones the day before when I went to locate my son’s apartment without benefit of having an actual address, but I never supposed the phenomenon would encompass road maps.

It seems, as the proliferation of cell phones is causing the demise of pay phones, the same is happening to maps because of the widespread use of GPS devices. After not finding any maps at the first two gas stations, I asked the young lady behind the counter about it and she told me they had no call for them any more.

I finally had to resort to asking directions, which proved useless, but by continuing to stop at every gas station we encountered, I eventually found a map. And we eventually found Matt and Lisa’s farm.

We had a terrific lunch of real, homegrown products and a nice long chat on the screened-in porch during a spectacular thunderstorm. Then we headed off to our next destination. Fortunately, I knew the way.

Down on the farm. 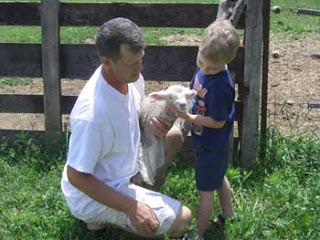 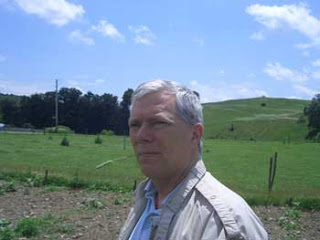 We spent the evening with some friends up north in a log home surrounded by forest; a peaceful and serene end to our days in the US. The next morning we would be heading back to Canada, and I would be taking these impressions of America with me:

– “Have a GREAT day!” seems to be replacing “Have a nice day!” I guess they felt they needed to up the anti.
– Despite reports that the US recycles more than the UK, I saw little evidence of it.
– Everywhere I went, no matter what I was doing, I was inundated by a barrage of options: crushed ice or cubes? Chocolate sauce or caramel? Economy sized or extra large? I think it supposed to be a good thing and emphasize the casual prosperity they enjoy, but I found it inconvenient and annoying after a while.

And finally, my Food Quests were all fulfilled:

Next: Quebec and Beyond