In the end, apathy and lack of money won the day.

About a year ago, the Shelly Fountain, Horsham’s iconic and vaguely pornographic water feature, fell into such disrepair that it was shut off and left forlornly empty. As time went on, the town polled the citizens to see what they wanted to do with this marvellous work of art that had put Horsham on the map. 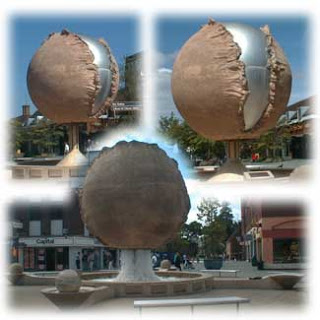 The response was underwhelming.

I wrote to the local paper stating the case for repairing the fountain, but it appeared I was a lone voice crying in a sea of curmudgeonly complaints. No one, it seemed, had wanted the poxy thing to begin with and they saw this as their chance to get shut of it. A Facebook page dedicated to bringing back the Horsham Christmas lights enjoyed 3,037 supporters; a similar page to show support for the fountain rallied only 315. Condemned by social networking, its fate was sealed; The Council decided it would have to go.

So the great ball was propped up on steel girders and the fountain area surrounded by a metal fence, and there it sat, sad and broken, like a death-row inmate waiting for the padre and warden to lead it on that final walk to the metaphorical gallows. There would be no phone call from the governor. 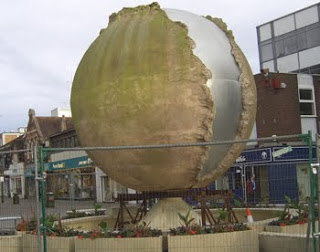 Waiting for the hangman.

But then a miracle reprieve arrived from an unlikely source: the economy collapsed, austerity budgets were adopted and, when The Council looked into removing it, they found digging it out and paving over the area would actually cost a lot more than fixing it.

Repairs began in March, which The Council made very clear were not paid for out of the district coffers but with grants from the art foundation. The fountain was cleaned and fixed and filled and ready to be re-unveiled at a ceremony during Horsham’s popular English Festival.

At the appointed time, the crowd gathered, the speeches were made, the fountain revived…and shut off due to an electrical fault. 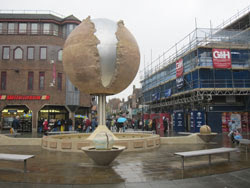 So now it sits, a little cleaner, but empty, nonetheless, waiting for the repairman.

But at least it’s still here.

6 thoughts on “Balls Up”