Skip to content
The other day, as I was doing the dishes (or “the washing up” as they say here), I began cycling through my vast repertoire of songs, which is something I enjoy doing while up to my elbows in soapy water because it serves to occupy my time, entertain those neighbors foolish enough to leave their windows open and annoy my wife, who is in the sitting room trying to watch The One Show.  On this occasion, I delved deeper than usual and came up with that Austiro-Wehrmacht classic, “Edelweiss.”
I jest, of course; “Edelweiss” was written for the 1959 production of Rogers and Hammerstein’s The Sound of Music.  Its popularity, however, has led some to believe it is an authentic Austrian folk song.  Ronald Reagan reportedly had it played during the visit of an Austrian official, believing it to be their national anthem, but that’s hardly surprising.
(Note: Austria’s actual National Anthem is, “Land der Berge,” or “The Land of the Burgers,” a homage to their love of McDonalds, Wendy’s and Burger King.)
(Note #2: I was going to make a quip about the Horst Wessel song but a quick check of Wikipedia confirms that the lyrics and tune of that song are banned in Germany and Austria, and it is an actual crime to play it.  While you have to admire their apparent commitment to putting that part of their past behind them, the notion of banning a song probably seemed more doable prior to the advent of YouTube and iTunes.)
(Note #3: “Ol’ Man River” is not, in fact, a traditional Negro spiritual; Rogers and Hammerstein wrote that, too.)
(Note #4: Putting the # symbol before a number is meaningless over here; what we call “the pound sign” and use to designate a number, the Brits call “the hash key” and use for activating telephone menu options.) 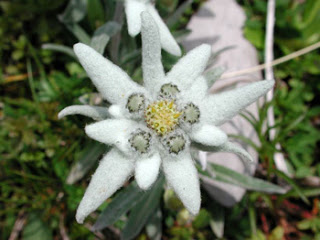 Edelweiss
Now that we have all that cleared up, let’s get to the heart of the matter: the song, or more specifically, the lyrics.
As I sang the song, which I have done a myriad of times in the past, I noticed something I never have before: the rhyming scheme, while undeniably catchy, breaks the rules, making it, in my view, an illegal song.
Now, the basic rhyming sequence is AABCCB (A-del-VICE, A-del-Vice, la la la GREET ME, la la WHITE, la la BRIGHT, la la la MEET ME).  This works fine for the first verse, even though the similarity of VICE/VICE in and WHITE/BRIGHT in lines 1 & 2 and 4 & 5 might lead some believe the sequence is actually AABAAB, which could cause confusion when the second verse comes around if you are not paying full attention.
Having avoided that pitfall, let’s take a look at the second verse:
La la SNOW
La la GROW
La la la FOREVER
La la VICE
La la VICE
La la la FOREVER
Do you see what they did there?  They rhymed “forever” with “forever.”  That’s not technically a rhyme; it’s more of a repetition, which is fine if the words come one after the other, as in “A-del-VICE, A-del-VICE” but you can’t rhyme a word with itself at the end of lines 3 and 6 and think people won’t notice (OK, it took a while, but still…).  It’s just wrong!
This surprises me, because Dick and Oscar were generally quite professional; to let something like that slip by seems a bit sloppy.  Perhaps they were up against a tight deadline;
“Think!  Think!  We need that song now!  What rhymes with ‘Forever’?”
“You mean, besides ‘forever’?”
“Weather?  ‘Bring my homeland nice weather’?”
“How about, ‘Bless my homeland.  Whatever!’?”
“How about we just leave it?  Who’s going to care in fifty years?
“Believe me, some idiot will make an issue out of it sooner or later.”
Proud to be that idiot.

One thought on “My Favorite Things”