Skip to content
America is such a vast place that, on any given day of the year, it is a good bet that you can find a world-class beauty spot somewhere. During the early weeks of October, however, that spot is definitely New England, and I would be remiss in not exclaiming (again) just how beautiful it is.

Our trip this year was fabulous and, despite my annual carping about the border crossings, fairly relaxing. The weather—traditionally agreeable in early autumn—was especially stunning, with sunny days, clear nights, crystal blue skies and temperatures that occasionally reached into the low 80s.

I was surprised, but pleased, to note that you Americans are not wasting your time braiding rubber bands as so many of the young people here are.

On the other hand, you are too busy panicking about the Ebola virus to have time for much else. (Seriously, relax—only a few people have it, it’s not exactly an epidemic; wash your hands, don’t kiss strangers on the mouth, you’ll be fine.)

What surprised me most, however, was how foreign I felt in my own country. As if I needed that nugget of unwanted truth underscored, I set out four times to visit friends or family and, four times, I got lost. And each time I was reminded that I had turned down the offer of a Sat-Nav with a contemptuous, “I grew up here; I know my way around.” (Also, they were going to charge me an extra $15 for the privilege. I think next time I’ll swallow my pride and pony up the extra cash; it will save a lot of aggravation in the long run.)
The rental car was another joy. The lights came on automatically, whether I wanted them to or not. And when I did want them on but they didn’t automatically light up, I had no idea where the switch was. It took me nearly a week to figure out how to turn on my headlights. Also, when I ran into a spot of rain, I put the wipers on and the rear window wiper came on with them. When I turned the wipers off, the back wiper kept going. I never did figure out how to turn that off and I spent the entire two weeks with a very clean back window.
Otherwise, it was a lovely time, with ample opportunities to play with the G-boys, test out navigation skills in the corn mazes and tour pumpkin patches with them (they were mad about pumpkins—good thing, too, because they were everywhere).

While we’re on the subject of pumpkins, is there anything you won’t put pumpkin flavoring in? I realize you had a lot of them, but pumpkin coffee, pumpkin yogurt, pumpkin ice cream? What happened to a good old pumpkin donut and a cup of hot cider?

Our visit to one farm was quite an eye-opener. Some farmers these days, in order to make ends meet, are turning their farms into family adventure parks. This is a bold move, as farms are insanely dangerous places. I have to say they do a good job sanitizing them, but sometimes I think they go too far. 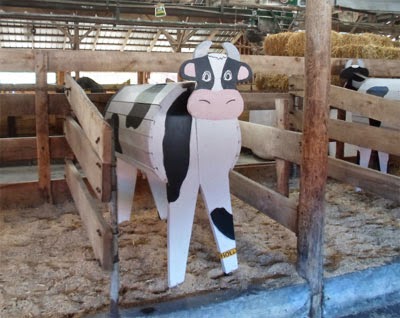 I was shocked to see that an onerous task we were forced to perform as kids is now something children flock to willingly—and pay for the privilege!

We left America just as the weather was turning, and arrived in Britain in time to enjoy another week of surprisingly mild days before autumn’s grip took hold. Strangely, I find—after the spectacular weather in the US and the mild days here in Blighty—that I am glad for the cooler temps. I has stopped me thinking that spring is just around the corner and has put me in the mood for turkey dinners, home-made bread and snuggling on the sofa with a hot toddy.

4 thoughts on “America the Beautiful”