Skip to content
It’s 5:51 AM and I am sitting in my office looking alternately at a blank screen and the paltry list of posts I have put up on this blog over the past year, and pondering the mystery of why, if I am so busy, I can’t find anything to write about. The reason is, some time ago, I made the decision to not write about these activities because I didn’t think anyone would be interested in them (as opposed, for example, to my kitchen renovation).
While I am still not convinced anyone would be interested, I am aware that not a lot else is going on in my life right now, so I’d better find a way to make these niche interests more interesting if I’m going to continue writing this blog. (And I sorta have to now; it’s one of the longest-running blogs in the short history of the Internet)*.
This encouraged me to think about what I am doing these days, and brought to mind the fact that I haven’t even mentioned my most recent undertaken, which is the one taking up the bulk of my time these days. Somehow, some way, about six months ago, I became increasingly entangled in an AmDram production.
(AmDram, for the US readers, is short for Amateur Dramatics. I’m not sure if this is a UK term, all I know is I never heard it until I came over here, but that may simply be because I wasn’t paying attention.)
Dramatics—Am or Pro—is not something I ever thought of getting into. While I do like theatre, I never leave a production thinking, “Hey, I’d really like to give that a go.” In fact, having known a few low-key thespians over the years, I was put off the idea when I discovered the amount of time and effort needed to put on even a small production. That, plus the fact that I can’t act. (Although, having seen a fair share of Amateur theatre, both here and in the States, I wonder that this is a requirement.)
My tale began last autumn, when a newish member of my choir sent me an email asking if I knew of any tenors (hint, hint) willing to help out with some songs a group she was in was doing. I said I’d be interested, even though I was unclear of what it was all about. I met with her, she explained a bit and, still not aware of what it was all about, I went to the meeting.
It turned out to be a local group putting on a sort of review of WWII songs and they needed a tenor and, well, stroke my ego and I’ll follow you anywhere. So, I signed on.
Over the ensuing weeks, I learned the songs, the movements, where the coffee was kept and, believe it or not, remained unaware of what I had gotten myself into. I remember thinking, as I was updating my schedule, that this new venture was not, as I had supposed, just another choir. With a choir, you can miss a session or two, but this—whatever it was—demanded my presence at the practice sessions, and I had to be there for the performances because—again, unlike a choir—there were parts only I could do. And I remember thinking I didn’t relish that sort of pressure.
And yet, I still remained unaware of what was going on until a few weeks ago, when I found myself on the costume committee, visiting local, and sizable, AmDram groups and hearing them chat to the other committee members, saying things like, “Weren’t you in that production of Oklahoma, back in ‘98?” or, “I was in Guys and Dolls with Allister last year, you remember him?” followed by, “Oh, yes, he and I did a modern-day version of Much Ado About Nothing in Guildford last year.” That’s when all the clues added up:

Then, belatedly, it hit me: I am in an AmDram group, doing amateur dramatics.

Fortunately, I don’t have a speaking role. All I have to do is sing, and do some movements to the songs, and over time I have noticed that, in most of the songs I am involved in, those movements (read: dramatic opportunities) have become less and less, and often disappeared altogether. (I told you I was a rubbish actor.)
As of this writing, there are two weeks and two days to the production. It will be presented at the Unitarian Church in Horsham on the evenings of the 22nd and 23rd of March, the Friday and Saturday. And I can’t say I feel anywhere near ready.
If you care to come see us—The Unity Players—present “Keep Smiling Through – WWII in songs and sketches” then, by all means, come. We’re trying to fill the hall; apparently, it’s no fun playing to a half-empty room.
Admission is free, which should appeal to you in the US. There is a Retiring Collection but if you’ve just spent a couple hundred on air fare, we’ll cut you a break.
And so, that’s what I spend a great deal of my time doing these days, until the end of March, that is, when they break up for the summer. They may or may not ask me to join them for their next production, but if they do, I think I might give it a go, as long as they don’t give me a speaking part. 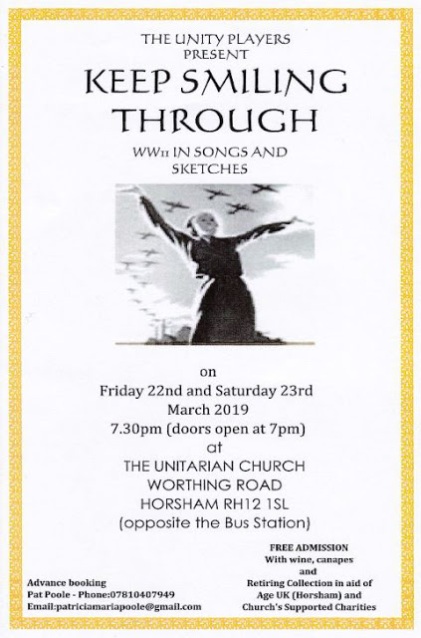 * I didn’t want to digress inside the post, but a claim as bold as that needs some validation, hence the long footnote:
The actual, longest, continually running blog is (or may be) Rec Humor Funny (you can read a bit more of the story of RHF\’s creation if you like), which was begun in August 1987.
My first foray into the Inter-Web was on the 26th of March 1996, and I began a Web Log (the forerunner of Blogs and from which the term Blog was fashioned) shortly thereafter. In those early days I used Xoom, Geocities and Tripod, among others, before buying my own domain, www.lindenwald.com, on 11 November 1999.
While I did have a number of blogs, they all merged from one into the other to form a continuous chronology, just with different titles. They were:
Cracks of Time
The Dumpster
Suburban Hell
The Soapbox
and possibly a few others.

These were all attempts to have some sort of creative, cathartic outlet while being held virtual prisoner by She Who Must Not Be Named (read the book).
In April 1999, I renamed my blog to Dance Diary so I could chronicle my latest obsession: becoming an Irish Dancer. This blog followed my progress, my competitions and my eventual trip to Ireland in 2001, after which it was re-branded as Postcards From Across the Pond, and it has remained so to this day.
In 2006 I finally moved from HTML to Blogger, and the Lindewald site eventually became home to my author website. All the past posts—the on-line versions at any rate—are gone, and Xoom, Geocities and their ilk no longer exist.