I’m having some unexpected difficulties plotting my current novel due to a peculiarly British phenomenon: the obsession with putting CCTV cameras on, well, everything. Now, other countries have CCTV, but none deploy them with the alacrity of the British.

To be brief, the villain in my story needs to push a hapless victim onto the railroad tracks, and it needs to look like an accident, but with an estimated camera-to-civilian ratio of 1 to 32, it is patently impossible to pick your nose, scratch your arse or, more to the point, throw someone under a train, without it being captured on the current equivalent of video. Even the most remote, rural railway station I could find was bristling with CCTV cameras. It is truly disheartening.

And the thing is, this only causes problems for people like me. If I go ahead and write that scene, people will read it and toss the book aside, thinking, “What rubbish! If anyone tried to do something like that they would be spotted on CCTV!” And because the public has this perception, my job is harder (are you feeling sorry for me yet?), but the sad truth is, my villain most likely could get away with it because, despite the proliferation of cameras, they never seem to capture any criminals.

We spend billions of pounds in this country monitoring every corner of every city, village and hamlet but all I have ever seen on the local news are grainy shots of grey blobs with hoods stretched over their heads walking away from whatever mayhem they have caused while the voice over pleads to the entire nation, “If you recognize these people, call 999-1984.”

Surely those billions of pounds could be better spent putting a few more bobbies on the beat to catch these miscreants red-handed. Though I fear that would do little good, either.

I can’t tell you how many times I have shouted at the telly (someone has to do it) while watching one of those “Cops With Cameras Instead of Guns” shows, where drunken reprobates careen in a stolen car through narrow village streets ejecting beer bottles and bags of dope while crashing into property, other vehicles and cops cars until, after crashing into the wall of a 14th century church and destroying the chapel, they jump out of the car the lead the police (and the helicopter) on a merry chase before finally being brought to heel by the K-9 Squad in someone’s back garden. All I can think is how much this all cost in terms of man-hours, equipment, damage, etc., but at the end of the segment, the announcer joyfully relates how the passenger in the vehicle was later released without charge and the driver was taken to the local police station where he was given a very stern warning.
That\’s when my wife usually changes the channel. 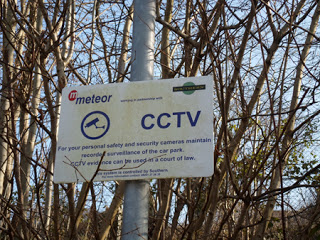 The fact is, all this CCTV data is good for is to provide footage for the above-mentioned shows.
And, of course, to keep my villain from throwing someone under a train.